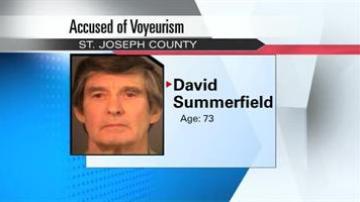 According to the probable cause affidavit, a maintenance employee saw Summerfield in the attic of le Mans Hall bent over and looking at something on the floor.

Summerfield was allegedly looking through a hole into the showers of the fourth floor bathroom of the residence hall.

Further investigation revealed several holes in the ceilings of the public and private bathrooms on the fourth floor of the women's dormitory, according to the affidavit.

Officers with the St. Joseph County Prosecutor's Special Victims Unit spoke with Summerfield. He then allegedly admitted to drilling holes in the attic floor so he could watch the female students while they showered. He said he began doing so in 2013.

He also allegedly admitted to stealing clothing out of the laundry room.

The affidavit says student clothing was found at Summerfield's residence.