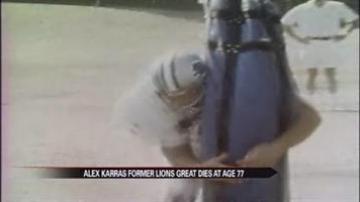 A former Detroit Lion and actor in the sitcom "Webster" died Wednesday.

The former Detroit Lion also had dementia and was part of  more than 3,500 NFL  players suing the league over how they handled head injuries.

Karras will be remembered as a four time all pro defensive tackle and also as Webster's adoptive dad in the 1980's sitcome.