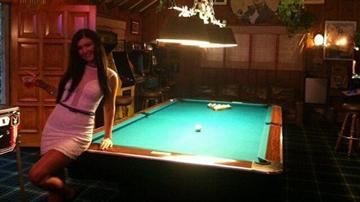 MISHAWAKA, Ind. -- A former Mishawaka resident says what started out as a fun challenge has turned her life upside down. She’s featured on Playboy.com, which launched a promising modeling career.

Many in Mishawaka know her as Allison Braden. She attended Mishawaka High School and can now be seen as a cybergirl on Playboy.com.

Before leaving Mishawaka, Allie made waves at the now closed Hooters off of Day Road.

“I was one of the first calendar girls and promotions managers,” said Allie. “I always loved having my picture taken.”

Allie, who spoke with us on Skype, says she entered a Hooters competition one weekend and came up short, so she went to an open casting in Chicago for Playboy.

She never got a call back.

She tried again when she and her husband moved to LA and she landed a spot on their website.

"Did some pictorials, now officially a Playboy cyber girl. Every month there is a competition. They pick one of the month,” said Allie.

Since her debut, she has toured Hef's mansion, the game room and the grotto.

She's even been to the mansion for a party.

"Not a lot of people get the party,” said Allie.

Allie says she hasn't run into much bad publicity since her pictures were published.

“My dad is like, ‘You’re so crazy.’ So supportive. My mom supports me. My grandma, everyone is very supportive,” said Allie.

Allie Marie is currently working with a photographer on a number of other projects.

She also says she gets letters from fans from all over the world.