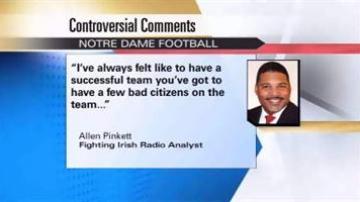 Pinkett told a Chicago radio station that if a football program was to be successful they would have "to have a few bad citizens on the team."

Coach Brian Kelly suspended quarterback Tommy Rees and linebacker Carlo Calabrese after they got into a scuffle with police back in May.

Pinkett has since apologized for the comments.

But it may not be enough.

"The Notre Dame IMG Network is extremely disappointed in the comments made by Allen Pinkett in his radio interview. We completely disagree with those comments. As his employer, we will be determining disciplinary action to be taken."