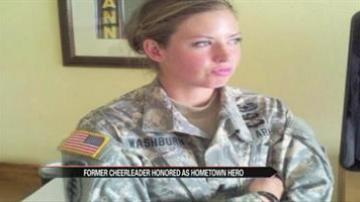 PHILADELPHIA -- A special tribute was held during Sunday night's Bears vs Eagles game in Philadelphia.

Rachel Washburn, a first lieutenant in the Army and former Eagles cheerleader, was cheered on by the team she used to cheer for as the "hometown hero."

Since leaving the NFL in 2009 she has earned a bronze star for two tours of duty in Afghanistan.

Washburn says she is considering re-enlisting next year.