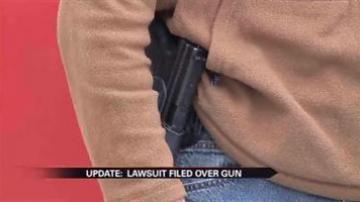 ST. JOSEPH CO., Ind. -- On Wednesday, a former serviceman filed a lawsuit against the St. Joseph County Election Board, county police, and several other groups.

Clay Edinger could not vote in the May Primary because he wore a gun into the Warren Township Fire Department.

Officials told him he had to leave the gun in his car in order to come into the building a vote.

But it's not illegal to carry a gun inside a fire department.

Edinger and his attorney want to make sure doesn't happen to anyone else.

"We're not asking for anyone to go to jail over that, but what we are asking for is that to be looked at critically," said Guy Relford, the attorney filing the civil suit.

Edinger is also seeking money for damages and attorney fees.