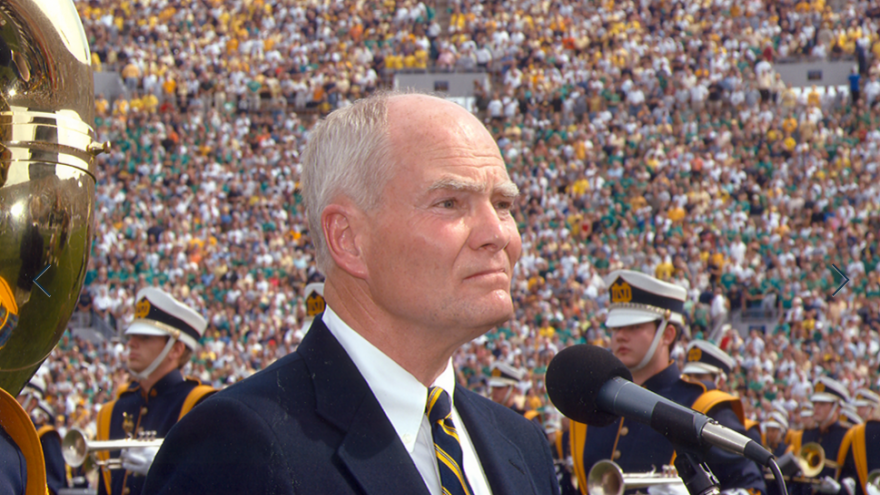 SOUTH BEND, In. -- Former Indiana Governor and South Bend Mayor Joe Kernan has passed away at the age of 74, following a long illness

“Indiana mourns the loss of Joe Kernan, a bona fide American hero, decorated Navy officer, and truly selfless statesman who always placed the interests of his fellow Hoosiers first. Distinguished isn’t a strong enough word to describe him. Without regard for personal cost, Joe Kernan devoted every ounce of his life, time and again, to upholding the oath he took, and serving the country and state he loved. Undeterred after being shot down and tortured in Vietnam, he returned and led his beloved City of South Bend as mayor for three terms, and our state as our 47th lieutenant governor. When duty called him to step into a role he didn’t seek, he served as our 48th governor. Through his decades of servant leadership and sacrifice, Joe Kernan modeled all the best of what it means to be a Hoosier and his legacy will continue to live on in each of us whom he inspired. Janet and I ask Hoosiers across our state to join us in lifting up in prayer Mrs. Kernan, their incredible family, and all whose lives he touched.”

“Joe Kernan’s many and noteworthy contributions to Notre Dame, our community, the state and our nation cannot be overstated. A student-athlete at the University, he earned a bachelor’s degree in government, then entered the Navy and served as aviator in Vietnam, where he demonstrated uncommon heroism when shot down and held as a prisoner of war for 11 months. As a three-term mayor of South Bend, he set the city on an upward trajectory that continues to this day. He likewise served our state with distinction, first as lieutenant governor and then, upon the sudden passing of Gov. Frank O’Bannon, stepping up as governor. In addition to his government service, he was a beloved civic leader who never shied away from challenges. He was always a good friend to Notre Dame, and a friend and support to me personally. We were proud to have him as an alumnus, and as an adjunct faculty member in political science. In presenting Joe with an honorary degree in 1998, the University praised him as an ‘accomplished public servant who played a pivotal role in strengthening this University’s town-gown relations.’ He went on to deliver a superb commencement address to the graduating class. Our prayers are with his wife, Maggie, their family and his many friends. We grieve over his passing while simultaneously recognizing a remarkable life. May he rest in peace.”

“Joe Kernan showed us all the meaning of service, sacrifice, and leadership. We will remember with gratitude his decades of selfless service to his country and community as a Naval flight officer, prisoner of war, longtime mayor of South Bend, and lieutenant governor and governor of Indiana. Dean and I join all Hoosiers in mourning the loss of Joe Kernan and praying for his beloved wife and their entire family.”

"I mourn the death of my good friend Joe Kernan, former Governor of Indiana, and send my family’s love to Maggie, Joe’s beloved wife and best friend. There are not enough words to describe the amazing, good life of Joe Kernan – Husband, Patriot, Friend, Navy, Courageous POW, Notre Dame, South Bend, Hoosier and American through and through. We love you and miss you, dear friend Joe. Safe travels on your final mission – God bless you and Maggie."

“Joe Kernan was the most impressive and authentic gentleman I’ve ever had the honor of calling a friend. I’ve rarely known anyone who would do as much as he did for the city and the state that he loved so much. And I can tell you in all honesty, I would not be here in this wonderful South Bend region, if not for Joe Kernan. He’s made a major difference in my life, my family’s life, and surely, the lives of every citizen in the great state of Indiana. Today, is a sad day. I pray now for Maggie and Joe’s brother and sisters. May God bless Joe Kernan, one of the greatest men I’ve ever known.”