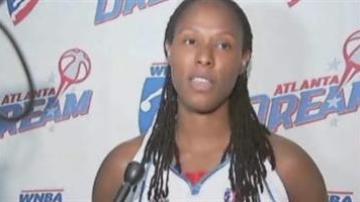 ATLANTA-- A former WNBA player is locked up after being  accused of attacking a woman's Range Rover with a bat.

Police said she pulled out a gun and opened fire. Olympic gold medal winner Chamique Holdsclaw turned herself in to Atlanta police Thursday.

The alleged victim, Jennifer Lacy, is a current WNBA player. In a police report, she describes herself as Holdsclaw's ex-girlfriend.

She claims the woman followed her Tuesday and when she pulled over, things took a turn for the worse.

"After she used the baseball bat, the victim stated that she then pulled the firearm out and pointed the gun inside the car and fired a round,” said Lt. Jeff Cantin.

Police believe Holdsclaw may have poured gasoline into the car. They believe she shot at it to start a fire.