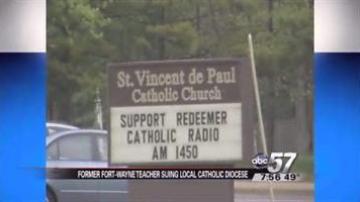 FORT WAYNE, Ind. -- A former Fort Wayne teacher is suing the Catholic Diocese of Fort Wayne-South Bend after she said she was fired for receiving fertility treatments.

Emily Herx taught at Saint Vincent de Paul School for eight years. Because of infertility issues, her and her husband tried in vitro fertilization and she said when the school found out, she lost her job.

The diocese is defending its actions.

In a written statement the diocese said it is saddened by the lawsuit but denies any discrimination.

It says as a religious employer, it has a right to make decisions that are consistent with its religious standards.

The Catholic Church doesn't condone treatments like in vitro fertilization, since embryos are often destroyed.