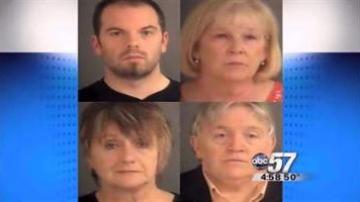 SOUTH BEND, Ind. -- On Monday morning, the four people accused of voter fraud all appeared before a judge in St. Joseph County.

Butch Morgan, Pamela Brunette, Beverly Shelton, and Dustin Blythe are all accused of conspiring to force signatures before the 2008 Presidential Primary.

On Monday, the judge gave all four until August 27th to enter a  plea.