Four arrested in connection to string of burglaries in Kosciusko County 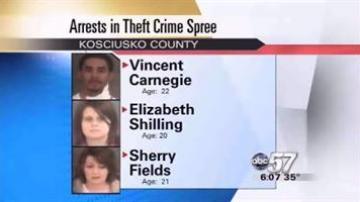 KOSCIUSKO COUNTY, Ind. -- Two men and two women are locked up, accused in a string of thefts across Kosciusko County!

Deputies caught up with them early Monday morning after reports of a "suspicious" vehicle in the Hawthorn Subdivision.