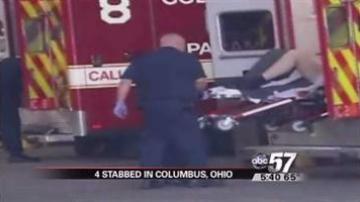 COLUMBUS, Ohio – Four people were stabbed at a downtown building.

Police say a man walked into the Continental Building armed with two knives.

An officer arrived within minutes and shot the man several times.

Police believe there's a possible connection between the suspect and the victims, but that's still unclear.

Right now, three of the victims are in critical condition.