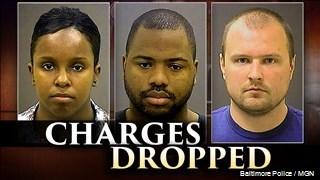 (CNN) -- Baltimore State's Attorney Marilyn Mosby is going from prosecutor to civil defendant in connection with the case of the death of Freddie Gray.

On Wednesday, Mosby announced that charges against three officers still facing trial were being dropped. Mosby gave only a statement, but had to leave without taking questions because five of the officers in the case have filed lawsuits against her.

Officers Garrett Miller, Edward Nero and William Porter as well as Sgt. Alicia White and Lt. Brian Rice are suing Mosby and Maj. Samuel Cogen of the Baltimore Sheriff's Office. Cogen was the law enforcement officer who filed charging documents against the officers.

The lawsuits allege false arrest, false imprisonment, defamation or false light, and other assertions. They were filed in U.S. District Court in Maryland in 2015 in late April and early May around the time the officers were arrested.

Gray died in a hospital on April 19, 2015, a week after police stopped him on a Baltimore street. After his arrest, officers placed Gray in the back of a police van, which made several stops.

When the van arrived at the police station, Gray was unresponsive. His neck was broken and compressed, prosecutors said in court, comparing the spinal injury to those suffered after a dive into a shallow pool.

Rice and Nero had already been acquitted in separate bench trials. So had Officer Caesar Goodson, who apparently has not filed suit. Porter was the first to be tried but his case ended with the jury unable to reach a unanimous decision.

Mosby's office dropped the charges against Miller, Porter and White on Wednesday.

An attorney for two of the officers said Wednesday that there were ulterior motives in charging the officers.

"Marilyn Mosby's comments in her press conference today confirm that the charges brought against my clients, Sgt. Alicia White and Officer William Porter, as well as the other four officers, were politically motivated and not supported by evidence to establish probable cause," Michael E. Glass said.

He said his client suffered "extensive pain and suffering." Porter and White had been suspended without pay until Wednesday. They are now on desk duty after more than a year on leave.

Rice, the highest-ranking officer charged in the case, paints himself as minimally involved, according to court documents.

He was the first to make eye contact with Gray, the lawsuit concedes, but he was not involved in the arrest. When a crowd gathered around the police wagon where officers were attempting to place an "uncooperative" Gray, Rice "directed other officers to move the wagon approximately one block south in order to complete paperwork and otherwise effectuate Mr. Gray's arrest."

Gray "continued to yell and scream" and slam himself against the side of the van, causing the vehicle to shake, so officers removed Gray from the wagon and placed him in flex cuffs and leg shackles, according to the lawsuit. He was placed back in the van, where he again "began to bang the inside of the wagon."

That marked the end of Rice's interaction with Gray, the lawsuit says.

"At no point during his interactions with Mr. Gray did Plaintiff Rice see any officers use excessive force, strike or tase Mr. Gray," the lawsuit states.

Rice accuses Mosby of realizing the case would draw widespread media attention and speaking "in a divisive and inciting manner" while making false statements about him. Mosby's remarks, Rice alleges, broke the state's code of professional conduct, which forbids lawyers from making "an extrajudicial statement" they know will prejudice a court proceeding.

One of the false statements Mosby made, according to Rice's case, was saying the knife Gray was arrested with was legal under Maryland law. Rice contests in his lawsuit that it was spring-assisted and therefore illegal, and says Mosby knew that.

Mosby told Cogen to file the erroneous charges against Rice, the lawsuit states.

The lieutenant "lost his freedom and dignity and suffered physical and psychological harm from being arrested and detained without cause," the suit says.

The litigants are asking for $75,000 per allegation, plus legal costs.

CNN left messages Wednesday with Cogen and his attorney.

CNN legal analyst Paul Callan said it is very difficult to sue prosecutors, who have what is called absolute immunity. Mosby's attorneys will argue she was acting within the scope of her job and is protected by such immunity.

In most cases against prosecutors, the defense files a motion to dismiss and the judges agree, Callan said.

"Even lawyers are sometimes shocked at how difficult it is to hold prosecutors responsible for patently improper actions," he said about prior cases.

But in some cases, the plaintiffs will argue that the prosecutor stepped out of his or her role and acted as law enforcement, who have qualified immunity.

Callan said he thinks the plaintiffs will argue that Mosby, an elected official, did become an investigator because of her belief that police were not properly pursuing the case and her desire to appease her political constituency.