Freddie Gray verdict: Baltimore officer who drove van not guilty on all charges 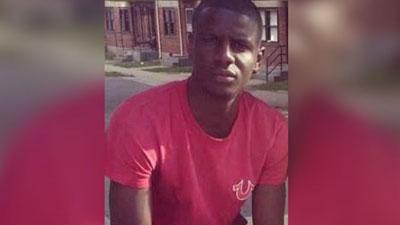 (CNN) -- Baltimore police officer Caesar Goodson, who drove the van in which Freddie Gray was fatally injured, was found not guilty Thursday on all charges, including the most serious count of second-degree depraved-heart murder.

Wearing a dark suit and blue shirt, Goodson was motionless as the verdict was read over 40 minutes. The officer's daughter wept as the judge acquitted him, count by count. Goodson embraced members of his family and legal team following the verdict.

Baltimore officer Edward Nero, who was also acquitted in May of assault and other charges by the same judge, clasped his hands and said, "Yes!"

A smattering of protestors carried signs outside the courthouse after the verdict.

The prosecution argued that Goodson was one of the worst protagonists in Gray's death, but Judge Barry Williams disagreed.

Gray, who was 25, suffered a devastating spinal injury and died in April 2015, about a week after he was arrested and placed into a prisoner van that Goodson was driving.

Of the six officers arrested in the case, Goodson faced the most serious charges. The second-degree depraved heart murder is a charge unique to a few states that implies that the defendant acts with extreme indifference with regard to the human consequences and perils of their actions.

The verdict is another setback for State's Attorney Marilyn Mosby, who dramatically announced the charges against the six officer last year from the broad steps of the downtown War Memorial.

Mosby, who has failed to secure a conviction following three trials, shook and bowed her head as the judge delivered the verdict.

Mayor Stephanie Rawlings-Blake called for calm in the community, saying that Goodson still faced an administrative review from the police department.

"I am proud that we as a community have come together to move our city forward over the past year," she said.

Prosecutors alleged that after Gray was arrested on a weapons charge, Goodson took him on a "rough ride" in a prisoner van -- a punitive measure police used against unruly subjects.

They said Goodson drove so erratically that he blew through a stop sign and veered into another lane of traffic because of the speed he was traveling, which prosecutors said would have tossed Gray around in the van. This is the point in the ride that prosecutors think Gray sustained his fatal spinal injury.

But Williams dismissed the "rough ride" theory as "inflammatory" and said the state failed to produce evidence of erratic driving or even excessive speed by Goodson. That the officer failed to put a seat belt on Gray, Williams said, does not prove that he intended to take him on a rough ride.

The prosecution also argued that Goodson neglected to provide Gray with proper medical assistance after Gray indicated that he wanted to go to the hospital.

Again, Williams disagreed, saying the officer had no way of knowing the "acute distress" Gray was in at the time.

"How would the average officer without medical training know the severity or the acute distress Mr. Gray was in?" asked Williams, a former prosecutor who investigated police misconduct cases for the U.S. Justice Department. "The State has not proven, beyond a reasonable doubt, that Gray was in need of medical attention."

The bench trial featured clashes between prosecutors and members of the police department, who accused each other of misconduct in the highly sensational case.

Thursday's verdict raises serious questions about the state's ability to successfully prosecute three other officers in connection with Gray's death.

Tessa Hill-Aston, president of the Baltimore City branch of the NAACP, said the fact Williams found said no evidence of a "rough ride" in the case did not mean the practice doesn't exist. On Twitter, her organization called the court decision "a wakeup call for Baltimore."

"Freddie is dead, and there's no justification for him being dead," she told CNN.

The Rev. C.D. Whitherspoon, a community activist, told CNN affiliate WBFF that the state's inability to convict a single officer represented a failure of the judicial system.

"We knew and they knew that this case was critical to the remaining cases," he said.

Defense attorneys for Goodson argued that there is no evidence of that rough ride and that Gray's injuries were caused in part by his own agitation and thrashing around in the van.

They said Gray was combative and uncooperative and that Goodson used his judgment to not put a seat belt on Gray because he felt it wasn't safe.

"We certainly don't want to speak poorly about the deceased, but Mr. Gray created the high-degree of risk," defense attorney Matthew Fraling said during the bench trial.

The defense added that, although he asked to go to the hospital, Gray never showed symptoms that would have called for immediate medical attention, such as bleeding, bruising or broken limbs.

Over the seven-day testimony, the state called 21 witnesses; the defense called on nine. Goodson didn't testify.

Gray's family has called for peace before the previous trials. Attorney Billy Murphy, who represents the family, even lauded the judge after Nero's acquittal. The city awarded Gray's family a $6.4 million settlement, averting a protracted civil court battle.

Williams will also preside over the upcoming trials of Officers Garrett Miller and Lt. Brian Rice next month. Sgt. Alicia White and Officer William Porter, whose initial trial ended in a hung jury in December, will be tried in the fall.

CNN's Amanda Wills and Miguel Marquez contributed to this report.