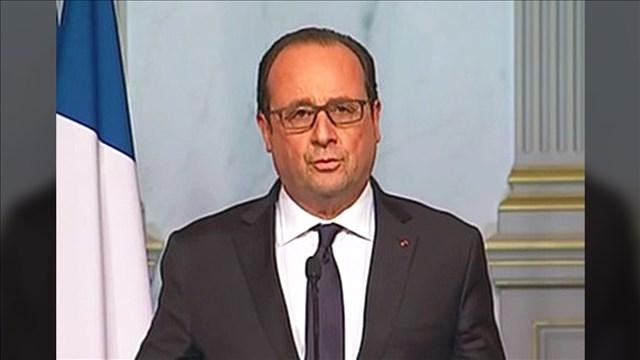 (CNN) -- France's President Francois Hollande announced Thursday he will not seek a second term in office.

French voters will go to the polls in April and May 2017, but Hollande, who has low popularity ratings, says he will not stand for re-election.

It is the first time since 1958, when France's fifth republic was created, that an incumbent president has not sought re-election.

Hollande's Socialist Party will now have to find a candidate to run against Francois Fillon, of the center-right Republican Party, and Marine Le Pen, of the far-right Front National.

Hollande, 62, defeated Nicolas Sarkozy in 2012 to become the first Socialist president to win a French election since François Mitterrand's re-election in 1988.

In announcing he won't run again, Hollande spoke against the ideas of Fillon and other conservatives.

"The far right calls us to retreat, to exit Europe and the world. They are taking as reference what happened in the United States of America," he said, referring to the election of Donald Trump. "I am clearly telling you, the greatest danger is protectionism. ..."

Fillon quickly fired back at the man he hopes to replace at the Elysee Palace, posting on Twitter: "This evening, the President of the Republic admitted clearly that his clear failure prohibits him from going any further."

"This five-year term ends in political chaos and the collapse of power. More than ever, the recovery of France must be built on solid foundations."

Hollande cited achievements under his watch, including opening up marriage to all couples, strengthening women's equality and fighting against discrimination.

He said unemployment had declined since the beginning of the year, but conceded "it remains at too high a level."

France has been hit by several major terrorist attacks while he was President.

In November 2015, attackers armed with automatic weapons and bombs struck six places in Paris, leaving at least 130 people dead and hundreds wounded. In January 2015, a total of 17 people died in attacks on the satirical magazine Charlie Hebdo, a kosher grocery store, and the Paris suburb of Montrouge. In July, a man plowed through a holiday crowd in Nice with a truck, killing at least 84.

"The world, Europe and France went through particularly severe tests during my term in office," Hollande said.

"In these terrible circumstances, I wanted national cohesion to be maintained, so that we could avoid division and stigmatization ... I took the necessary measures."

He said his one regret was wanting to strip terrorists of French citizenship, a move that split the Socialist Party.

"I thought that it could unite us when it divided us," he said.

Hollande, who served as an aide to Mitterand at the beginning of his career in the 1970s, joined the Socialist Party in 1979 and two years later stood for election against future President Jacques Chirac. Hollande lost.

Born in Normandy, northwestern France, the son of a doctor and a social worker, Hollande studied politics at one of France's most prestigious universities.

Hollande had a 28-year relationship with fellow politician Segolene Royal; they have four children together, but never married, and split in 2007.

In 2014 Hollande's private life became the subject of global headlines when the French magazine Closer claimed he had been having an affair with actress Julie Gayet for two years. He broke up with his companion, Valerie Trierweiler, who was considered the nation's first lady.