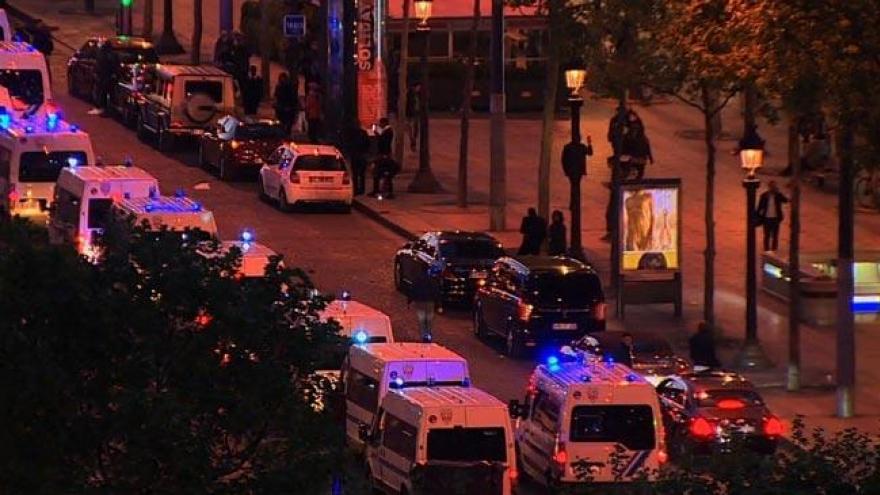 PARIS (CNN) -- Three French presidential candidates have halted their campaigns as Paris wakes up to yet another deadly attack, just days before a crucial vote that's still too close to call.

Security in the city has been building in recent days, but the presence of 50,000 police officers on the streets weren't enough to prevent the latest assault, which a source tells CNN is being treated as an act of terror.

Police appeared to be the target of Thursday night's attack, which unfolded on the Champs-Elysees in central Paris. The armed assailant shot and killed one officer, and injured two others.

Through its media wing Amaq, ISIS claimed the suspect was an Islamic State "fighter" they dubbed "the Belgian." CNN has not confirmed the attacker's association with the country.

The gunman, who was shot dead by police, had a long criminal record, a source close to the investigation told CNN. He was the subject of a "Fiche S" surveillance file and was on the radar of the French domestic security service DGSI, the source said.

A French national, the man shot two officers in 2001 after being stopped by a police car, according to the source. He was taken into custody but while being questioned grabbed another officer's gun and shot him three times, the source added. He was convicted in that attack and had a criminal record because of involvement in violent robberies.

Coming days before France votes in the first round of its presidential election Sunday, the shooting puts national security, terrorism and immigration at the heart of an already divisive campaign.

With a record number of voters still undecided, analysts say the shooting could play into the narrative pushed by the far-right.

Speaking during a televised debate around the time of Thursday's attack, Fillon said there was "no room for pursuing today or tomorrow an electoral campaign because first of all we have to demonstrate our solidarity with the police officers."

Far-right candidate Marine Le Pen said the attack showed the time for naivety "is over."

The attack unfolded on the famed Champs-Elysees around 9 p.m. local time (3 p.m. ET) when a car stopped in front of a police van, according to French Interior Ministry spokesman Pierre Henry Brandet.

A man emerged from the car and opened fire on the van with an "automatic weapon," killing one officer instantly, Brandet said. The man "then ran away, managing to shoot and wound two other policemen. Other policemen engaged and shot and killed the attacker," he added.

The slain officer was 30 years old, Paris Prosecutor Francois Molins said. One of the wounded officers was critically injured but is improving, he said. Also wounded was a female tourist.

The shooting has not officially been declared a terrorist act but anti-terrorist forces are leading the investigation, French President Francois Hollande said.

Molins said he would reveal the shooter's identity in a press conference Friday, adding that officers were searching the man's residence in Chelles in the Paris suburb of Seine-et-Marne.

Earlier this week French authorities arrested two men in Marseille who were allegedly planning an attack in a run-up to the election.

Speaking in Indonesia Friday, US Vice President Mike Pence said the attack was just the latest reminder "that terrorism can strike anywhere at anytime."

Trump himself weighed in at a news conference in Washington following the attack. "What can you say? It never ends," the President said.

France has been in a state of emergency since the 2015 Paris attacks, which left 130 people dead. Parliament voted in December to extend the extraordinary provisions to ensure the protection of upcoming presidential and general elections.