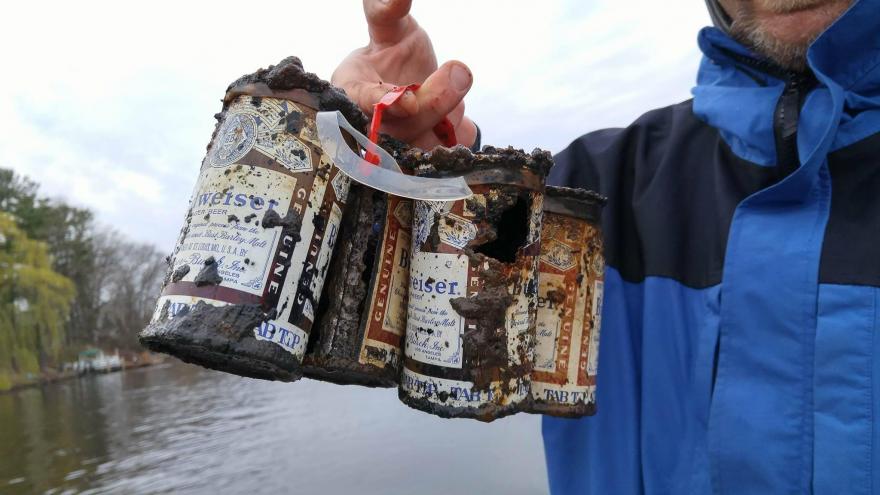 MILWAUKEE (CBS58) -- It's a true Wisconsin moment. Three guys on a fishing trip end up with a historic catch -- an old six pack.

"It just got snagged on the bottom, and we thought it was a rock or log, it happens all the time," said Adam Graves. "Truth be told, we pulled it up and it ended up being beer. "

Graves and buddy Christian Burzynski went fishing last weekend in Fremont, Wisconsin, on the Wolf River. Their friend Andy dredged up the beer cans -- which Budweiser tells them is at least 60 years old.

"They were empty unfortunately, I don't know how good they would've tasted anyways," Burzynski said with a laugh. "They would've been cold still, I'm guessing."

"Were just really surprised," said Graves. It's not every day you find something like that out on your line. It's just something to tell family and tell friends."

The cans were filled with sand from the bottom of the river. It also looks like some zebra mussels may have gotten a little thirsty -- several of them are still clinging to the tops of the cans.

These things end up on everything," said Burzynski. "They cut your line, they eat all the small plankton in the water."

How the beer got to the bottom of the river is a mystery. But because the tops of the six pack were pulled off, these guys are sure whoever they belonged to was having a good day out on the boat.

"Being from Milwaukee, it's usually Miller for us," said Graves. "But I guess whenever you can grab a cold one, you do."

"You don't find a lot of full beers lying around," Burzynski added. "That's for sure!"

Graves said he is thinking of keeping the cans as a memento - or maybe sending them to Anheuser-Busch as a relic or a museum item.