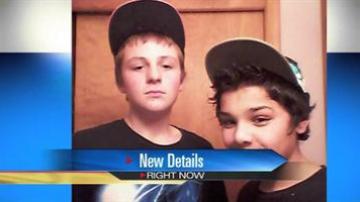 CASS COUNTY, Mich. -- The 14-year-old who took a car on a joyride along with his best friend remains hospitalized with serious injuries. His 12-year-old passenger died when the car struck a tree on Bertrand Street in Milton Township just south of Niles, Michigan.

Burr's family says he still doesn't know Chiquito was killed in the crash.

"We were snap chatting and he said, 'I'm going for a ride, I'll talk to you later.' And I never got to talk to him again," said Chiquito's friend Emily Williams.

Williams says she had no idea that would be her last time talking to her friend.

"He was always there when I needed to talk. I just wish it was just a dream," said Williams.

Friends of Burr and Chiquito say the two were inseparable.

Wilbert worries that even if Burr makes a full recovery, he will be crushed when he finds out Chiquito is gone.

"I feel really bad for him because I wouldn't be able to make it knowing that my best friend is dead," said Wilbert.

On Thursday, friends and family began fundraising to help pay for Chiquito's funeral.

"I could be having the worst day and I could just see his smile and it would brighten up my day, he had that glow about it him," said Austin.

Both boys were students at Brandywine Middle School.