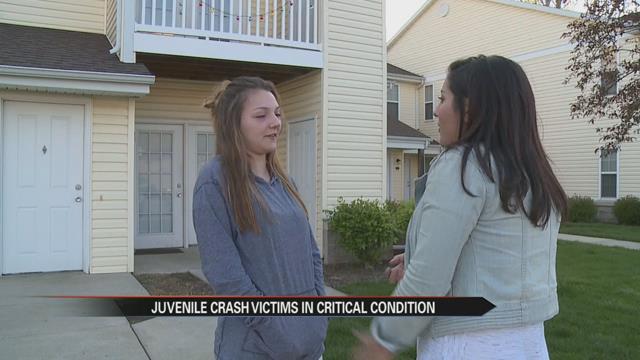 Although friends of the victims have reported a change in their conditions, the hospital says the latest information they can confirm is that all three victims are in critical condition.

Because the identities of the two juvenile victims have not been released by investigators, we will also be withholding their names.

Police identified 24-year-old Paul Graham as the driver of the vehicle that was hit just before 2 a.m.

Evidence on the scene showed Graham attempted to brake at the intersection of Rose Road and Plymouth-LaPorte Trail and was rear-ended by a 1999 Dodge Durango.

The impact caused significant damage to both vehicles and sent Graham and the two juveniles in the backseat to Memorial Hospital in critical condition.

The fourth passenger told us she was not injured in the accident.

According to a witness statement the occupants of the Durango fled the scene.

Police say the identity of the driver is being withheld for investigation purposes.

17-year-old Helen Decocker says one of the juveniles in the accident was her best friend.

“I kept calling her, I left her like seven voice mails of me just like crying and asking her what’s going on and I messaged her multiple times, no response,” said Decocker.

They had planned to hang out the night of the accident.

“She just understood who I was as a person, whenever I was down she was there to lift me up, she just inspired me to be a better person. I feel really upset, like part of me is gone because she is like my other half,” said Decocker.

Many friends say they learned the news through social media. Decocker’s tribute post is how friend Autumn Sparks says she found out about the crash.

“I thought it was a joke. I got really upset, I woke up looked at my phone, through Facebook. Loosing a best friend would just tear you apart. It’s something I don’t even want to think about,” said Sparks.

The Marshall County Sheriff's Department is continuing to investigate.