Friends of Jesse Williams work to get city flags lowered 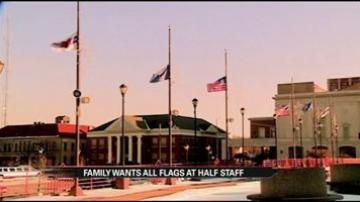 ELKHART, Ind. -- All Debbie Passerallo wants is the memory of her son, Staff Sergeant Jesse Williams, to be honored with respect and dignity.  Her friends feel the same way.

"We've got some close friends that have now called themselves Jesse's Warriors and they have taken it upon themselves to go visit these businesses and ask them respectfully to lower their flags for him," says Debbie Passerallo, Jesse's mom.

Four days later, nearly every government building, as well as private businesses in the town of Elkhart had lowered their flags.

As happy as they are about the respect shown to Jesse in his hometown, Melissa Clark, one Jesse's Warriors, says they wish it was extended beyond the city limits.