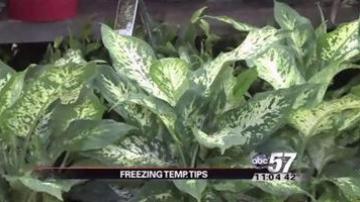 MISHAWAKA, Ind. --  With this overnight frost and Michiana’s ever-changing mood of temperatures.  Many folks are struggling to keep their plants alive.

ABC 57 talked with an accredited master plantsman at Home Depot in Mishawaka.

“We have been up most of the spring so far”, said Master plantsman Jeff Davis.

But this plant pro says the surprise frosts have even affected his plants.

“You know what I have already lost three plants this year”, said Davis.

But he says there is something you can do to protect your plants from the frigid temps.

“You can typically cover with a cloth..an old bed sheet works as well”, said Davis.

Davis says cloth will hold the grounds heat in and keep your flowers from wilting.

But if you don’t want to go through all the hassle, there are other options.

Jeff also says if you are trying to avoid the frost altogether..the easiest thing to do is pick up tropical plants like these and plant inside.

But if you forgot to cover those flowers, there still may be hope.

“If there is just a little growth tip dying, you can cut them and it will grow back”, said Davis.

But he says if they do not look alive, they probably won’t come back to life.

“If they are falling over and dying, they are done for.

Davis also told Abc 57 any kind of shrub or perennial are safe to plant now, but he says if you are concerned about the frost, it is best to wait until Mother’s Day to plant those fruits and petunias.