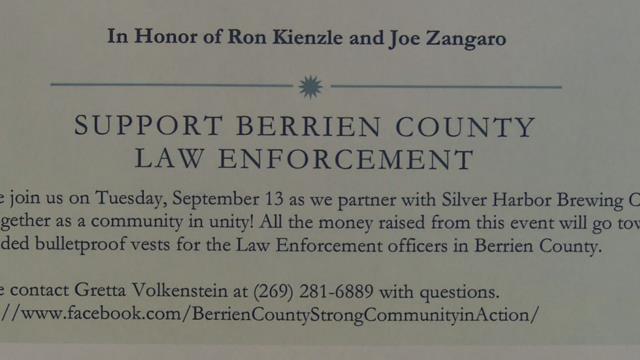 A Tuesday evening fundraiser in Berrien County is a continued effort to outfit the county sheriff’s department with upgraded bulletproof vests after July’s deadly courthouse shooting.

As part of the fundraiser, $1 from every pint of beer sold will be donated to the Berrien Community Foundation Fund, which is raising money for the new vests.

There will also be a donation basket, several dining specials, and the release of a new beer.

The event is family friendly, and is being put on by the foundation and the Berrien County Strong – Community in Action Group, which was founded by Gretta Volkenstein after she witnessed the chaos of the courthouse shooting from right outside.

She said she’s organizing events like this to help pay tribute to the two fallen bailiffs.

“That’s by being proactive and trying to honor Ron and Joe and the courthouse employees and making something positive come out of this tragedy that we had by connecting the community in any way that I can,” Volkenstein said.

Roughly $30,000 needs to be raised to outfit every county deputy with the improved bulletproof vests.

You can also donate to the fund here.