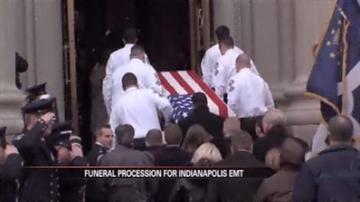 INDIANAPOLIS -- Tuesday, friends and family gathered to remember one of the Indianapolis EMT's killed over the weekend.

Twenty-four-year-old Tim McCormick and his co-worker twenty-two-year-old Cody Medley were killed when a car hit their ambulance.

McCormick’s body was carried in a large processional Tuesday morning just one day before a public memorial for the pair at Butler University.

"I think that anybody that puts the uniform on knows the risks they take every day, and it could happen to any one of us. It's a freak thing. It's tragic, and we're going to pull together and stick by each other and get through it all," said Evan Cisell, Indianapolis EMS.

An additional service will be held for McCormick in New York later this week where he will be buried.