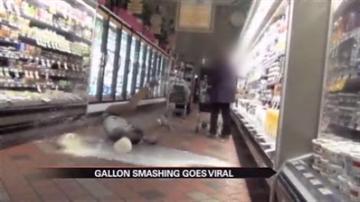 It is a viral video that has some people crying over spilled milk.

Three Virginia teens thought it would be funny to film themselves dramatically smashing milk jugs in a supermarket.

Some 3 million Youtube viewers also found the prank hilarious but not everyone was impressed.

"It does seem a bit malicious. Particularly because someone has to clean it up based upon that it can easily be viewed as a crime," said Dana Cole, ABC news legal analyst.

"It was just an innocent prank, no one got hurt, nothing bad happened," said one of the teens.

The boys have pulled down the Youtube video but different people have uploaded their own.

In Utah an alleged copycat 'gallon smash' incident caused 10 juveniles to be charged with disorderly conduct.