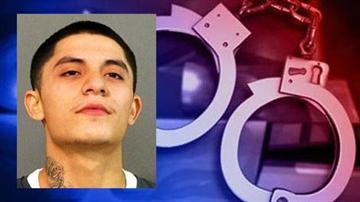 SOUTH BEND, Ind. -- An officer working traffic enforcement witnessed a vehicle run a stop sign and attempted a traffic stop on the vehicle. The driver fled and was eventually arrested after a brief foot chase, according to police.

According to South Bend Police, an officer was looking for drivers who failed to stop at Fellows and Klinger Street.

The officer saw a vehicle run the stop sign and attempted to conduct a traffic stop on the vehicle.

The vehicle fled northbound on Erskine Boulevard, then the driver stopped the car and ran, reports said.

The driver was captured in the 1100 block of E. Calvert Street, according to police.

He was later identified as 18-year-old Santiago Ortiz.

Ortiz failed to put his vehicle in park so it rolled into a school bus and caused minor damage, police said.

When taken into custody, Ortiz, who admitted to being a gang member, was in possession of a 9 mm handgun with two fully loaded magazines and over one ounce of marijuana, according to police.

He had never been issued a driver's license and had an active warrant out of St. Joseph County, according to police.

Ortiz was arrested and charged with felony resisting, resisting law enforcement, felony possession of marijuana, and possession of a handgun without a license.