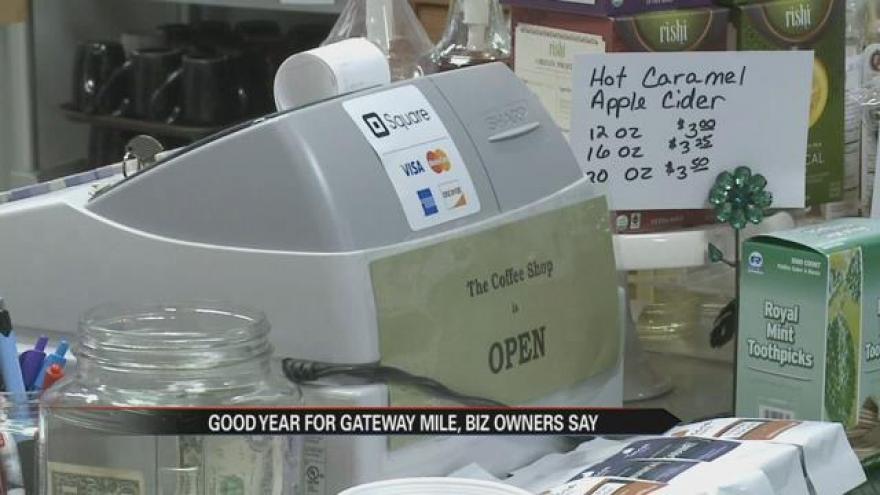 Organizers with Downtown Elkhart Inc. say 2015 has been a good year for The Gateway Mile with a decrease in store front vacancies and an increase in community events.

From hot dogs to home furnishing 2015 was a year of additions for Elkhart’s Main Street.

“I do think it is something unique to Elkhart,” says Katlyhnn Swan, the new manager at The Black Crow on Main.

Six new businesses opened up on Main Street and a group of merchants organized various events throughout 2015.

“There were several new businesses that were established though 2015 that became part of our alliance for the November and December programs," says Peter Recchio, owner of the new home furnishing store Dwellings.

In 2014 Recchio helped start a merchant alliance to organize Small Business Saturday and a December holiday shopping event known as The Gateway Mile Christmas. In 2015 they expanded their efforts to include summer art walks, shows at the Lerner Theater, an auto show, and a bridal show.

“There were other merchant alliance programs that were surrounding by events that were occurring in Elkhart such as the four art walks various Lerner theater productions,” says Recchio.

Recchio adds most businesses reported at least a 20% increase in sales during the community activities. New guy on the block Ed Hayden with Hot Dog Eddy says it was those downtown events that made a location on Main Street even more desirable.

“Anything that happened that causes traffic, people that notice new things and new things happening in downtown it always helps down town,” says Hayden.

The Black Crow On Main opened under new ownership the first of December and Swan says the Gateway Mile Christmas filled their store more than she would have imagined.

“Business in December was amazing things moved so fast it was so hard to keep up with everything,” says Swan.

A shopper says it’s the events that attract both shoppers and future merchants to Main Street.

“I think a lot more people are aware that downtown Elkhart is somewhere that you can go and shop and there is different things going on,” says Carissa Bousnakis of Elkhart.

Currently the Gateway Mile website lists 14 spaces up for sale. At the Black Crow on Main an expansion is underway. There will be space for 40 to 50 home good vendors to rent in 2016.