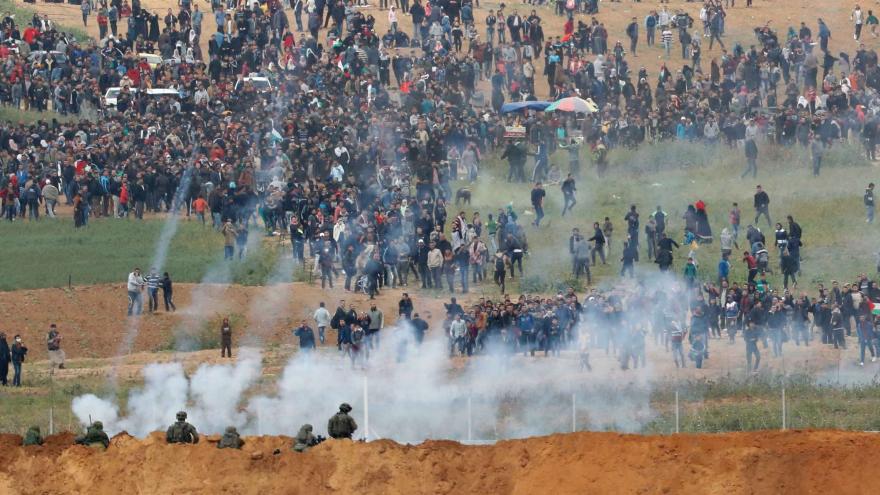 (CNN) -- At least 17 Palestinians were killed and more than 1,400 injured in confrontations with Israeli security forces during protests in Gaza on Friday, according Riyad Mansour, the Palestinian representative to the United Nations.

In northern Gaza, CNN witnessed at least two dozen people being taken away by ambulances in the span of half an hour as protests started across Gaza. They witnessed a small number of protesters in the crowd throwing rocks. People were injured by live rounds, rubber bullets and tear gas. The majority were young men -- one woman was among the injured.

The Israel Defense Forces (IDF) said in a statement that thousands of Palestinians were "rioting throughout the Gaza Strip, rolling burning tires and hurling stones at the security fence and at IDF troops, who are responding with riot dispersal means and firing towards main instigators."

An IDF official warned any breach of Israeli sovereignty will be treated severely, following a week of numerous attempted and successful breaches of the border fence from Gaza.

Confrontations escalated into Saturday. Israeli fighter jets targeted three Hamas sites after an IDF position was shot at in northern Gaza, according to an IDF statement. Tank fire also targeted the three sites, following an exchange of fire.

The largest protest seen in Gaza in years coincided with Palestinian Land Day, which commemorates the confiscation of Palestinian-owned land in Israel in 1976.

Fawzi Barhoum, a Hamas spokesman in Gaza, said the large crowds at the protests reflected the determination and will of the Palestinian people for the right of return, and to "break the siege" of Gaza.

Prior to Friday's protest, organizers said the march would be nonviolent, but they warned of possible military fire from Israeli forces.

Ahead of the protests, the IDF increased the troop presence and put snipers along the border fence.

An Israeli official told CNN that among those killed Friday were "known terrorists" including two members of Hamas, the political and militant group that controls Gaza.

In a statement released Friday evening, the IDF said it blamed Hamas for "all events and incidents taking place in today's protests."

In a tweet earlier Friday, Israeli Defense Minister Avigdor Lieberman warned Gaza residents that Hamas is "risking your lives." He added that anyone who approached the border was "endangering his life."

The Palestinian Health Ministry in Gaza said 1,416 people were wounded as protesters marched toward the fence that separates Gaza from Israel. By the end of the day, the ministry spokesman in Gaza said there were 758 injuries from live bullets and 148 from rubber bullets, and the rest suffered from gas inhalation and other injuries.

Tent cities have been set up to host the marches, which are expected to continue through May 15 when Palestinians mark the anniversary of the "Nakba" ("Catastrophe"), the day after Israel declared independence in 1948. Roughly 700,000 Palestinians were displaced from their homes during the subsequent Arab-Israeli war, which lasted for nearly a year.

Today, approximately 1.3 million Palestinians living in Gaza are registered refugees, according to the United Nations.

The United States plans to move its embassy from Tel Aviv to Jerusalem around May 14, the 70th anniversary of Israel's declaration of independence, followed by "Nakba Day," increasing the potential for further protests and clashes.

US President Donald Trump's controversial decision to relocate the embassy and recognize the contested city as Israel's capital was slammed by most of the international community and has galvanized Palestinian protests against Israel. Both Israelis and Palestinians claim Jerusalem as their capital, and to many Palestinians, the change was viewed as a further erosion of hope for a two-state solution.

The Trump administration said the decision was a "recognition of simple reality" and claimed it was not meant to prejudge final-status negotiations about the city's final borders, although Trump later said he had taken Jerusalem "off the table" when it came to any future peace negotiations between the Israelis and Palestinians.

Palestinian President Mahmoud Abbas said he is holding Israeli authorities responsible for those killed Friday, and announced Saturday as a day of mourning.