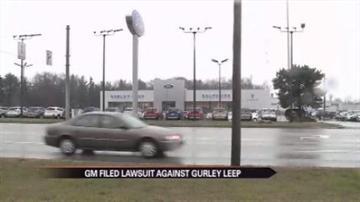 ELKHART, Ind. -- General Motors is suing a well known local car dealership for fraud and unlawful conduct. The suit was filed against Gurley Leep in federal court in Iowa.

In the federal lawsuit filed this month in Iowa, General Motors claims the dealership’s owners moved around a fleet of more than 1400 new Chevy Malibus between their Indiana and Iowa locations.

Then the lawsuit claims the dealership would advertise the cars as "used" or "like new.”

GM alleges it was duped into paying Leep dealerships tens of thousands of dollars for the automaker’s cash incentive programs.

When contacted over the phone for comment, the corporate communications person for General Motors said they do not have any comment on this pending lawsuit.

We stopped by Gurley Leep in Mishawaka outside of their corporate headquarters hoping to get comments from Mike Leep Jr --Mike Leep Sr or the COO Don Reese.

Reese says their policy when it involves a lawsuit is no on camera interviews-- but they did issue a statement.

"In reviewing the notice, we disagree strongly with the allegations and consider them entirely unfounded and without merit. This action is unprecedented and will be vigorously defended.  We have prided ourselves on having exceptionally strong relationships with the 30 manufacturer partners we have represented over the past 35 years.  While dealers and manufacturers have disagreements from time to time, we are confident that when the facts are presented, the courts will find in our favor."