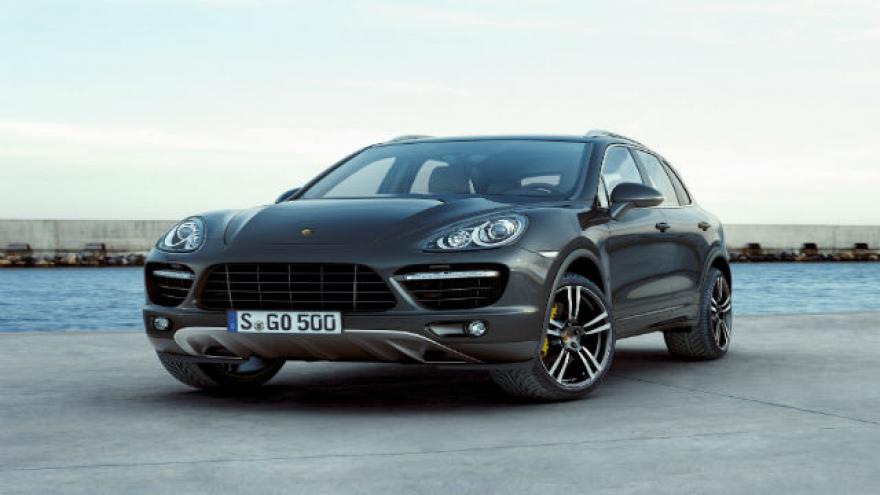 The German government has recalled tens of thousands of Porsche SUVs after discovering they are equipped with an \"unauthorized defeat device\" allegedly used to cheat on emissions testing. Photo courtesy Porsche

By Charles Riley and Mark Thompson

LONDON (CNNMoney) -- The German government has recalled tens of thousands of Porsche SUVs after discovering they are equipped with an "unauthorized defeat device" allegedly used to cheat on emissions testing.

Transport minister Alexander Dobrindt said the mandatory recall covers 22,000 Cayenne 3-liter TDI vehicles in Europe, 7,500 of which are registered in Germany. He said the model is currently in production.

German regulators have suspended the vehicle's certification. That means Porsche, a Volkswagen subsidiary, will have to produce new software and have it checked and authorized before the company can sell any more of the model.

Porsche said in a statement that it had "detected irregularities in the engine control software" and notified the transport ministry. It suggested the problem could be fixed with a software update.

"Porsche continues to carry out internal audits on its vehicles," the automaker said. "If there is something that is not OK, then we tackle it and get it right."

The German auto industry has been a powerful ambassador for Europe's biggest economy. One in every five cars worldwide carries a German brand. But its three biggest firms -- Volkswagen, BMW and Daimler -- are still grappling with the diesel emissions scandal.

BMW announced a software upgrade Sunday for at least 350,000 diesel cars to incorporate "knowledge gained in the field over the last years to realize further improvements in emissions."

Last week, Daimler offered owners of more than 3 million Mercedes vehicles in Europe a service upgrade to reduce emissions amid mounting questions over its diesel engines. At the same time, it said it had created a line of diesel engines with "exemplary emissions" that would be introduced rapidly across its model range.

The moves are aimed at avoiding driving bans in towns and cities in Germany, where politicians and top executives are due to meet for a "diesel summit" next week.

Volkswagen has already agreed to pay billions of dollars in federal fines and pleaded guilty to criminal charges in the United States. But it could be in for more pain. Dobrindt said the Touareg SUV might be equipped with the same software as the recalled Porsche SUVs, but the issue has not yet been fully investigated by regulators.