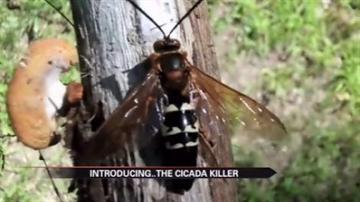 SOUTH BEND, Ind.-- It’s that time of the year, large cicada killers are swarming around people’s yards and they look like really large hornets. An insect expert at Rum Village Nature Center says these bugs aren't harmful to humans.

Vincent Gresham, assistant director at the nature center says these creatures are harmless.

Gresham said, "We had all these kids at day camp sitting right out here in this area with all these things flying around them and occasionally landing on their head and arms and stuff like that.”

Gresham said that around this time of year the nature center receives an influx of calls from people in South Bend who have these large hornets in their yards.

Gresham said, “In fact a lot of people will call us and say my backyards infested, there are a dozen flying all around. Most of the time if there are a whole bunch of them. Most of what you are seeing are males fighting for territory and they don’t even sting.

Only the females can sting.

Gresham said, “She catches those insects, stings them, drags them into a burrow that she has dug and then lays an egg on them and that will be the food for her babies.”

Since these large insects kill cicadas, the nature center is advising people to leave them alone unless they want to stay up at night listening to more cicadas humming outside.