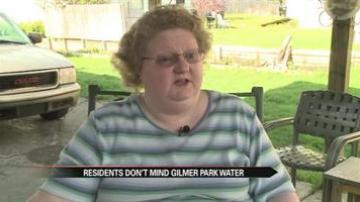 SOUTH BEND, Ind. -- Residents in Gilmer Park are not backing down against claims about their well water. The St. Joseph County Health Department ruled it unsafe to consume, but folks who live in the community disagree.

“I give this water to my pets and I would never endanger them," said Hatfield. "My husband drinks this water. I even bring this water up to my in-laws who also live in South Bend who are in their 80’s and they drink this water.”

While she believes it's safe, the St. Joseph County Health Department says differently.

They say the water is filled with high levels of nitrates that should not be consumed, but Hatfield says not her well. She says she got her water tested independently.

“I found out today that my well was tested and my nitrates were at 5.00 when the minimum standard is 10.00. So, obviously my well is fine," says Hatfield.

The other issue is money. The health department recommends residents switch to city water, but Hatfield says no one on her street has the money for that.

“Most everybody around here is on a fixed income, they’re elderly or disabled or they’re living paycheck to paycheck. We can’t afford thousands of dollars to hook up to the road to our houses,” said Hatfield.

At a meeting, the St Joseph County Health Department said there was fecal matter in the water.

“I couldn't think of a gentler way to say this but the cause of this is human waste," said St. Joseph County Health Officer Dr. Thomas Felger.

“He wants to be gentle about saying human waste," said Hatfield. "Well, we all know what human waste is. It’s not like it’s a dangerous subject to talk about. We all go to the bathroom. It has to go somewhere. If your septics are pumped out properly, you’re not going to have the leeching into the wells that they’re discussing.”

Hatfield believes her pumps are safe. She thinks her water is just fine to drink.