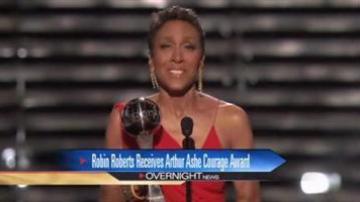 LOS ANGELES — The 2013 ESPY Awards were handed at out at the Nokia Theatre in Los Angeles on Wednesday night. The annual awards show honors athletes, teams and other sports-related performances.

Roberts has saluted for how she kept viewers involved during her treatments during her two serious illnesses. In 2007, she was diagnosed with breast cancer. And in 2012, Roberts underwent a bone marrow transplant.

Roberts came over to ABC from ESPN. She was the networks first black female sportscaster.