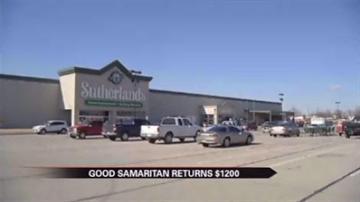 HARRISONVILLE, Mo. --  A Missouri man was faced with a very tough decision when he discovered $1,200 along the street.

The man was on his way out of a hardware store when he saw an envelope full of cash on the sidewalk.

Instead of keeping it, he went back inside to look for its owner.

"We go up and ask him if he lost anything and he looked around his pockets and realizes he did.  I reached in my pocket and handed it to him. He took a look at me and he said, 'I hope it's all there,'" said Kyle Osborn.

He recieved no thank you.

He says he did not expect that kind of response but says it is a reminder not to judge a book by it is cover.