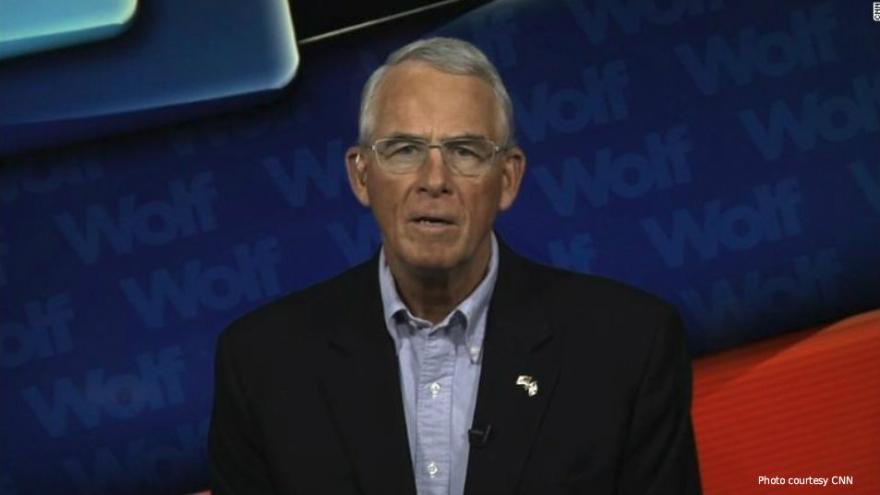 (CNN) -- Florida GOP Rep. Francis Rooney walked back the tenor of his call earlier in the week for a "purge" at the FBI, but maintained Wednesday that the bureau should oust individuals he views as politically compromised.

"It might be a pretty strong word. I'm not maybe the most nuanced political person in the world," Rooney said in a Wednesday interview with CNN's Brianna Keilar.

Nevertheless, Rooney said he was "pretty frustrated" with FBI officials whom he believes displayed bias and further called for the House Oversight Committee to significantly expand an internal probe that turned up messages critical of President Donald Trump in an exchange between two FBI officials during the campaign.

Rooney, a former diplomat and top Republican donor turned first-term member of Congress, made similar comments in interviews on Tuesday.

Speaking on MSNBC, Rooney called for the FBI to "purge" politically compromised officials who represent the "deep state."

"I'm very concerned that the DOJ and the FBI, whether you want to call it 'deep state' or what, are kind of off the rails," Rooney said.

Rooney's comments place him alongside several other Republicans squarely in the corner of President Donald Trump, who has continued to ratchet up his criticism of the FBI and Department of Justice as Mueller's investigation progresses.

But Texas GOP Rep. Will Hurd, in a Wednesday interview with CNN's Dana Bash, said he does not believe the FBI is compromised and vouched for the bureau's rank-and-file while stressing Congress should continue its investigations and its oversight of the bureau's leadership.

"We have to ensure that the political leadership of these organizations are operating with the same level of focus and discipline that the rank and file are," Hurd said.

Asked specifically if he agreed with the President asserting that the FBI is "tainted," Hurd said, "I don't," and nodded to ongoing questions from Congress about the FBI and DOJ.

Meanwhile, Rooney said in his CNN interview that he also holds the FBI and the Department of Justice in "high esteem" and said he trusts Mueller, whose reputation is "impeccable." Rooney said he was "disheartened" to see that Mueller had selected a team of lawyers he viewed as overly comprised of Democrats, referencing available data on campaign donations that shows some members of Mueller's team donated to Democratic candidates.

Rooney returned repeatedly to Strzok, whom Mueller removed from the investigation after becoming aware of the anti-Trump messages, and to Bruce Ohr, a Justice Department official who was demoted amid the discovery of certain meetings with Fusion GPS founder Glenn Simpson and Christopher Steele, the former British intelligence officer who assembled the Trump-Russia dossier.

Rooney praised Mueller for removing Strzok, but said both Strzok and Ohr should lose their jobs and that the House Oversight Committee needed to get "to the bottom" of the motivations behind Ohr's actions.

"I think it's great that he pushed that guy off the investigation," Rooney said of Strzok. "I think they probably ought to push him right out the door."