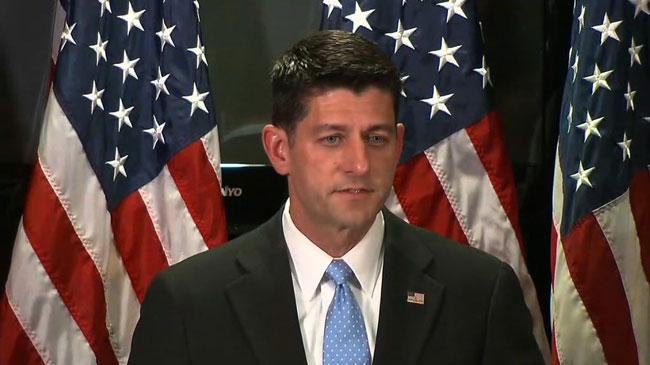 (CNN) -- A high-profile gun bill pushed by House Republicans leaders remains in limbo because a key bloc of conservatives opposes it and GOP leaders can't muster the votes to pass it.

Democrats pounced on the issue Thursday, tying up the House floor for hours with another push for votes on measures to expand background checks and prevent those on the terror watch list from buying guns.

House Speaker Paul Ryan acknowledged that he had work to do with his own members to get consensus on his legislation, which is part of anti-terrorism package of measures he and other leaders drafted and planned to vote on this week.

"We're not going to rush it," the Wisconsin Republican said at a news conference. "We're going to get it right. And that's what we're working on with our members."

The speaker also vowed Democrats would face sanctions for the 25-hour sit-in they launched last month on the House floor that delayed legislative business and forced GOP leaders to cut their voting schedule short.

Republicans planned a vote this week on legislation that would ban gun sales to those on a government watch list -- a measure inserted into a broader Homeland Security bill. But several conservatives in the House Freedom Caucus maintain that the provision in the bill threatens individuals' Second Amendment right to bear arms.

Other Republicans have expressed frustration that scheduling a vote on a gun bill plays into Democrats' narrative that new laws are the way to address the recent spate of attacks like the one at an Orlando gay nightclub inspired by the terror group ISIS.

Pelosi argued the delay on moving the GOP bill "shows that House Republicans are completely untethered from the reality of gun violence in our country."

Many House Republicans are growing impatient that the Speaker and other leaders haven't dealt out punishment to Democrats for the protest, which caught them off guard and pushed off votes on other priorities before the Fourth of July holiday break. The effort was led by civil rights icon, Rep. John Lewis, of Georgia, and during the lengthy sit-in, administrative staff did little to shut it down for fear of giving the effort an even larger public profile.

The speaker told reporters Thursday that episode turned the House floor into "a partisan war zone."

Ryan and other top GOP leaders met with the House Sergeant at Arms, Parliamentarian and Rules Committee staff to review what happened during on the lengthy sit in and discuss possible penalties.

Most House Democrats participated in the unprecedented effort and broke longstanding rules about protesting in groups, political activity and speaking out of order when the chair gavels it's time to move onto other business. Because the GOP moved to recess the floor and cameras operated by the House majority were turned off, members used Periscope, Facebook and other social media platforms to broadcast their speeches.

"I am very worried about the trend and the precedent so we are looking at all options for consequences to make sure that we can get Congress working again," Ryan said, but wouldn't elaborate on what specific punishments could be handed down.

Ryan lamented that that the House floor was the one place in Congress where members come together to work out differences and by ignoring the rules Democrats were denigrating the institution. He added that by tweeting and using Periscope to commandeer the floor "we have eviscerated any vestige of bipartisanship."

But Democrats brushed aside threats of sanctions, and spent much of Thursday on the floor preventing GOP leaders from considering an annual spending bill for financial services. As the House opened up for the day, Massachusetts Democratic Rep. Seth Moulton went to the well for morning hour and began reading the names of gun violence victims on the floor. As he recited each name a series of House Democrats came up next to him in the well and held up pictures of victims. It is against the rules for more than one member to stand at the podium at a time.

The presiding officer informed Moulton that his time expired, but he kept reading, so the Chair gaveled him down and recessed the House. When legislative business resumed, House Democrats lined up and asked one after another for "unanimous consent" for the House to take up gun legislation, holding pictures of victims of gun violence.