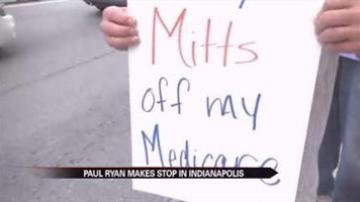 Ryan served as the keynote speaker for a GOP fundraisers.

The media was not allowed inside but cameras caught protesters as they greeted Ryan outside the event.

Monday's trip marks the Ryan's first major visit to the Hoosier state since he was announced as Mitt Romney's running mate.