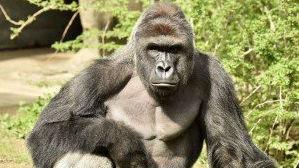 (CNN) -- The mother of the 3-year-old boy who fell into a gorilla exhibit at the Cincinnati Zoo will not face charges, an Ohio prosecutor said Monday.

"By all accounts, this mother did not act in any way where she presented this child to some harm," Hamilton County Prosecutor Joseph Deters said.

"She had three other kids with her and turned her back. ... And if anyone doesn't believe a 3-year-old can scamper off very quickly, they've never had kids."

After the boy slipped into the enclosure May 28, he had a 10-minute encounter with Harambe, a 450-pound gorilla. A witness told CNN the boy's mother was temporarily distracted by other children when the boy fell into the exhibit.

Harambe pulled the boy across a moat and was fatally shot by zoo personnel.

Deters said the zoo lost "a beautiful animal" that was beloved in the community, "but it's still an animal. It does not equate human life."

Zoo: We had to shoot Harambe

Video shows Harambe standing next to the child and dragging him through the water. The zoo has staunchly defended its decision to shoot Harambe as necessary to protect the child.

The boy was not seriously injured, but much of the scrutiny in the aftermath of the incident has fallen on his family.

One witness said she overheard the boy telling his mother he was going to get into the moat.

"The little boy himself had already been talking about wanting to go in, go in, get in the water and his mother is like, 'No you're not, no you're not,' " said Kimberley Ann Perkins O'Connor.

The mother admonished her son to behave before becoming distracted by other children with her, O'Connor said.

"Her attention was drawn away for seconds, maybe a minute, and then he was up and in before you knew it, she said.

For days, the Internet was barraged with think pieces on the incident -- some condemning the boy's parents.

They became the center of criticism as calls for criminal charges mounted. An online petition seeking "Justice for Harambe" received more than 500,000 signatures.

The family thanked its supporters but has declined donations, saying it was something "we do not want and will not accept, according to a statement released by family representative Gail Myers.

Instead, they asked that gifts be directed to the Cincinnati Zoo "in Harambe's name."

Impact on the zoo

The Cincinnati Zoo's Gorilla World exhibit is scheduled to reopen to the public Tuesday.

The zoo said it has raised the public barrier to 42 inches, added solid wood beams to the top and knotted rope netting to the bottom.

"Our exhibit goes above and beyond standard safety requirements, but in light of what happened, we have modified the outer public barrier to make entry even more difficult," said Thane Maynard, director of the Cincinnati Zoo, in a statement.

Both the U.S. Department of Agriculture and the Association of Zoos and Aquariums have launched investigations into the Harambe episode.

The USDA, which inspects the zoo annually, will look into whether the facility was in compliance with a federal law that monitors the treatment of animals in research and exhibition. The Association of Zoos and Aquariums is the group that accredits zoos.

"In the case of this incident, which involved a child and a critically endangered animal, our collective goal is to take steps to assure it doesn't happen again," Kris Vehrs, the interim president and CEO of the zoo association, said in a statement.

CNN's Faith Karimi and Steven Visser contributed to this report.