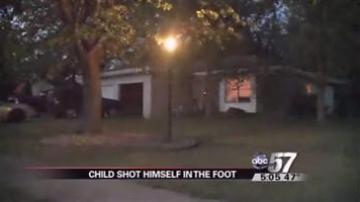 GOSHEN, Ind. -- A Goshen boy is recovering after police say he shot himself in the foot.

It happened just before 3:45 Tuesday afternoon on the Southeast side of Goshen.

Neighbors told ABC57police had yellow tape around the house. They say the shooting was an accident.

“I got here and there was yellow tape,” said Kristyn Sleesman. “When I got our daughter a police man and another police man said not to worry we shouldn't be afraid.”

Neighbors also say the gun used was a rifle. The young boy had surgery and is expected to be okay.