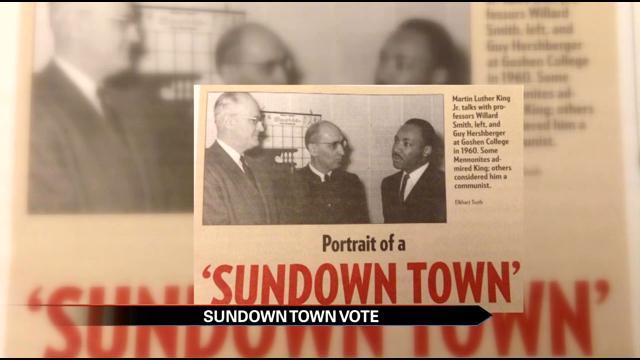 A proposal to recognize the city of Goshen's dark racial history will soon be decided.

Tuesday, City Council will vote on the resolution.

“Sundown town:” that's what some referred to Goshen's segregated city after dark up until the late 60's.

A resolution presented to city council is asking the city to put this history on the books, but some residents want this proposal to stay in the dark.

We first told you about this in December.

Dan Shenk and Lee Roy Beery are the two residents pushing to bring this resolution to light.

The resolution passed unanimously at the Goshen community relations commission meeting and now faces its biggest hurdle in city council.

Some councilmen believe their constituents wouldn't want to support something that would harm the city's image.

“They feel like this may have been the actions back in the 40's and 50's but the makeup of our town today would show that we're certainly not the town that we were 50 years ago, said Jim McKee, City Council President. “I had a number of people that felt that it was just an unnecessary move and it may stir up something that we really don't want to.”

Council President McKee also says this history was not exclusive to black residents and other ethnicities were also discriminated against.

He thinks if it doesn't pass tonight, he would support a resolution recognizing all injustices in Goshen's past.