ELKHART COUNTY, Ind.—Despite facing challenges, a Goshen man is using his Parkinson’s disease diagnosis to help find a potential cure, both by raising money across Michiana for the Michael J. Fox Foundation and contributing his own genetic data to a nationwide research study.

Goshen resident Steve Squires was diagnosed with Parkinson’s 19 years ago, while he was in his early 20’s, and since then, has used the challenge as a platform to advocate for research into a cure for the neurodegenerative disease.

“I wanted to take it to know if my son could have it,” Squires said. 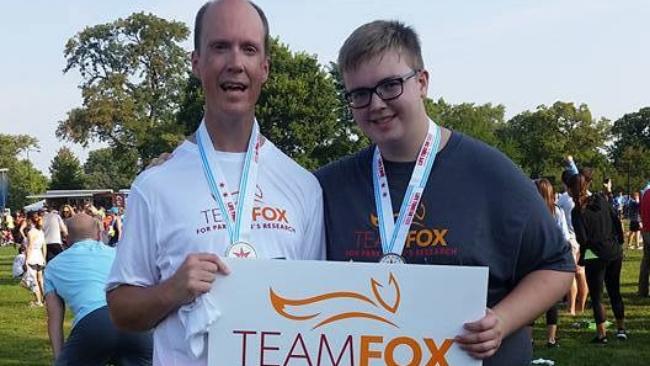 Steve Squires with his son, Jared, at a Team Fox event.

While Squires does not have known family history of the disease, he decided to take the test to find out if genetic markers commonly associated with the disease were present in his results.

“The results were very interesting. Some of the bio-markers that they’ve found in the past maybe were not relevant to me,” Squires said.

About 38,000 people in the United States and 600 people living with Parkinson’s disease in the state of Indiana have taken the test as part of the partnership but the foundation hopes more people will do it.

“It’s interesting to understand environmental factors that contribute to Parkinson’s disease and geography plays a big role in that. While 38,000 people in Fox Insight sounds like a lot, only 600 people in Indiana doesn’t give us enough insight into what’s happening for people with Parkinson’s living in that state,” said Katie Kopil, Director of Research Partnerships for the Michael J. Fox Foundation.

The data from Fox Insight is provided to registered researchers to study the disease, which currently, has no known cure.

Squires hopes that the more people that do it, the closer researchers may get to finding that cure.

“Definitely do it. Don’t hesitate to do it. The more data they have, the better chance we have to cure this disease. Information is power,” Squires said.

For more information on registering for Fox Insight, click here.

Squires became involved with the foundation about five years ago when his wife, Kelli, decided to run a fundraiser race to benefit the organization.

Since then, the Squires family has raised money each year with the help of the local community.

Photos: The Squires family at past events with the Michael J. Fox Foundation

On August 3, Squires is hosting the 4th annual “Party to Fight Parkinson’s” event to benefit the foundation.

The event begins at 9 a.m. at Signature Lanes and Maple City Bowl in Elkhart and will include open bowling, raffles, bounce houses, refreshments and more with a donation. The all-day event will even feature a visit from the DeLorean from “Back to the Future” at 5 p.m.

100% of the proceeds will benefit Team Fox for Parkinson’s Research.

According to the Fox Foundation, Parkinson’s disease occurs when brain cells that make dopamine, a chemical in charge of coordinating movement, stop working or die.

“It’s the equivalent of slowly being robbed of your livelihood. Every year something seems to be torn away from me, whether it’s my ability to do riding a wake-board to shooting a basketball,” Squires said. “Simple things in life that slowly get taken away from you, that you take for granted on a normal basis like walking, talking and even writing. When you have Parkinson’s,  your writing tends to get really small and really jittery. People take that for granted every day.”

According to the National Institutes of Health, about 50,000 people are diagnosed with Parkinson’s disease each year and roughly half a million people are living with the disease.

The CDC says the disease is caused by “complex interactions between genetic and environmental factors."