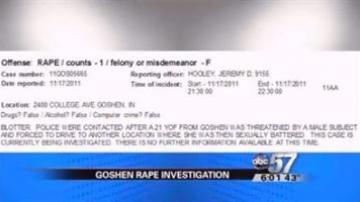 GOSHEN, Ind. -- A 21-year-old Goshen woman told police she was abducted outside of the nursing home, Courtyard Health Center on College Avenue on November 17.

Keisha Morrison was treated and examined by the IU Health Goshen staff and released.

Morrison told police that she was forced to drive from 2400 College Avenue to an unknown location where she was sexually assaulted.

After further investigation, police said that the report was false. They are forwarding the case to the Prosecutor's office to review. Morrison may face charges for false reporting.

(Source: This information was from a press release, courtesy of the Goshen Police Department.)