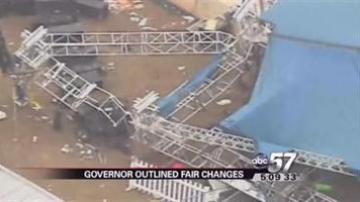 INDIANAPOLIS, Ind. -- Just a day after Jennifer Nettles from Sugarland spoke out about the deadly stage collapse, Indiana Gov. Mitch Daniels is looking to make some changes.

Tuesday he ordered the Indiana Department of Homeland Security to begin reviewing temporary outdoor structures like the stage rigging that collapsed on August 13.

Daniels also said some people could be fired at the state fair commission as part of an overhaul he's now considering.

He did not say whether that included the state fair director.