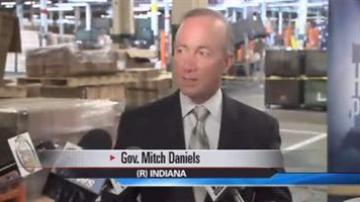 SOUTH BEND, Ind. -- "It's starting to look like a stampede, and we'll take everyone that wants to join us," said Indiana Gov. Mitch Daniels Wednesday.

He visited South Bend to talk jobs, and tour manufacturing plant, RACO, to announce an expansion within the company.

It will be moving its central distribution plant from South Holland, Illinois to South Bend early next Spring.

"This is a strong company," said Daniels. "It's growing, and they have an upside."

That upside includes bringing more jobs to the area; up to 77 by 2015.

That'll provide a boost of more than two million dollars into the local economy each year.

"Financially for us, this is actually a better deal," said Chris Hildebrandt, General Manager of RACO. "We're closer to our manufacturer and closer to our customers. We do save money, so this is one of the things we do."

So far this year, 30 companies have relocated to Indiana from other states, but this is the first one for South Bend.

Daniels said that while it's a step in the right direction, he's hoping more can be done in years to come.

"Hoosiers are used to doing big things," said Daniels. "We'll expect future employees in jobs like mine to keep on coming up with good ideas; the way I see South Bend starting to do here.