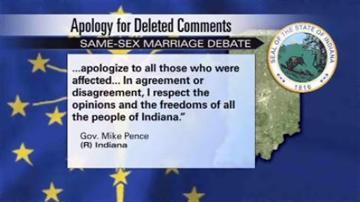 Indiana governor Mike Pence is apologizing to gay marriage supporters for their comments being deleted on his Facebook page.

"Some comments were being deleted simply because they expressed disagreement with my position," said Pence. "I regret this occurred and sincerely apologize to all those who were affected in agreement or disagreement. I respect the opinions and the freedom of all the people of Indiana."

Pence says he wants Indiana voters to decide on marriage equality. State republicans have pushed to send a same-sex marriage ban to voters next year.