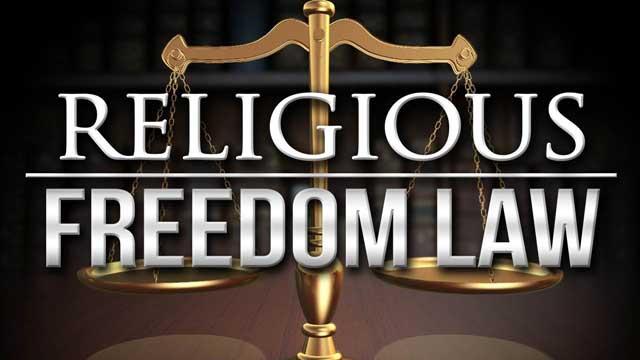 Top Indiana Republican lawmakers overhauled their week-old religious freedom law Thursday with a follow-up measure intended to ease concerns driven by businesses that it could lead to discrimination.

They appear to have tamped down some of the criticism -- but in doing so they've infuriated social conservative activists, and they've set the stage for a bigger fight next year over expanding Indiana's anti-discrimination law to cover gays and lesbians.

The GOP-dominated House and Senate approved a legislative fix, which was added into an unrelated bill, on Thursday, sending it to Pence's desk almost immediately.

Pence hasn't yet said whether he'll sign the fix into law -- and conservative groups like Indiana Right to Life are urging him to veto it, despite the measure's strong Republican support in the legislature. But GOP legislative leaders have signaled it's unlikely Pence will veto it.

The changes would prohibit businesses from using the law as a defense in court for refusing "to offer or provide services, facilities, use of public accommodations, goods, employment, or housing" to any customers based on "race, color, religion, ancestry, age, national origin, disability, sex, sexual orientation, gender identity, or United States military service."

It doesn't accomplish what the law's critics wanted most: Adding sexual orientation to the list of categories protected by Indiana's anti-discrimination law.

But that debate, GOP legislators acknowledged, is coming soon. House Speaker Brian Bosma said the backlash against the religious freedom law has "opened many perspectives" and that the anti-discrimination law "needs to be discussed."

Indiana's rapid rush to change its controversial law comes as Republican governors in states like North Carolina and Georgia back away from similar proposals in their states.

Arkansas Gov. Asa Hutchinson, who just days ago said he was rejecting the first version of a religious freedom bill that landed on his desk, got the changes he wanted, signing into law Thursday afternoon a religious freedom measure that lawmakers there had revamped this week so that it's identical to the federal law.

The religious freedom debate has touched a particularly raw nerve in Indiana, where a GOP push to amend the state constitution to prohibit same-sex marriage and civil unions was defeated last year -- exposing tensions within Republican caucuses that already have more than two-thirds super majorities in both the Indiana House and Senate.

Several Indiana cities already have anti-discrimination laws that include sexual orientation, but the legislative fix to the religious freedom law will be the first time protections based on sexual orientation or gender identity are recognized statewide.

Social conservatives lambasted lawmakers for walking away from what they saw as a crucial protection for Christian businesses that did not want to provide services to gays and lesbians -- particularly for same-sex weddings.

Eric Miller, the head of Advance America and a powerful lobbyist who stood behind Pence at last week's private bill signing ceremony, said on his website: "Among the things that will happen, Christian bakers, florists and photographers would now be forced by the government to participate in a homosexual wedding or else they would be punished by the government! That's not right!"

Nationally, social conservatives expressed similar objections. Russell Moore, the president of the Southern Baptist Convention's Ethics and Religious Liberty Commission, tweeted: "This Indiana "compromise" is a train wreck. It should be voted down."

Still, lawmakers said they had to do something.

"What was intended as a message of inclusion was interpreted as a message of exclusion, especially for the LGBT community," Bosma said Thursday morning. "Nothing could have been further from the truth, but it was clear the perception had to be addressed."

The Indiana law and a similar bill that Arkansas Gov. Asa Hutchinson has asked lawmakers there to change had drawn criticism from major companies like Apple, Walmart and Salesforce, as well as sports associations like the NCAA, NBA and NFL.

Katie Blair, the head of Freedom Indiana, a group that lobbies against anti-LGBT measures and is funded by several of Indiana's largest businesses, said the changes announced Thursday "represent a step in the right direction."

"Today, the harm has been lessened, but we have not reached the day when LGBT Hoosiers can be assured that they can live their lives with freedom from discrimination," Blair said.

Even as they moved to fix the law they'd passed, though, Indiana Republicans maintained that nothing had really been wrong with it in the first place.

"It was misinterpreted," Bosma said. "But all we can say is we are sorry that misinterpretation hurt so many people."

“The freedom of religion for every Hoosier is enshrined in the Constitution of the United States and in the Indiana Constitution, which reads, ‘No law shall, in any case whatever, control the free exercise and enjoyment of religious opinions, or interfere with the rights of conscience.' For generations, these protections have served as a bulwark of religious liberty for Hoosiers and remain a foundation of religious liberty in the State of Indiana, and that will not change.

“Last week the Indiana General Assembly passed the Religious Freedom Restoration Act raising the judicial standard that would be used when government action intrudes upon the religious liberty of Hoosiers, and I was pleased to sign it.

“Over the past week this law has become a subject of great misunderstanding and controversy across our state and nation. However we got here, we are where we are, and it is important that our state take action to address the concerns that have been raised and move forward.

“Last weekend I called upon the Indiana General Assembly to clarify that this new judicial standard would not create a license to discriminate or to deny services to any individual as its critics have alleged. I am grateful for the efforts of legislators, business and other community leaders who came together to forge this clarifying language in the law.

“Hoosiers deserve to know, that even with this legislation, the Religious Freedom Restoration Act enhances protections for every church, non-profit religious organization or society, religious school, rabbi, priest, preacher, minister or pastor in the review of government action where their religious liberty is infringed. The law also enhances protection in religious liberty cases for groups of individuals and businesses in conscience decisions that do not involve provision of goods and services, employment and housing.

“In the midst of this furious debate, I have prayed earnestly for wisdom and compassion, and I have felt the prayers of people across this state and across this nation. For that I will be forever grateful.

“Our state is rightly celebrated for our pro-business environment, and we enjoy an international reputation for the hospitality, generosity, tolerance and kindness of our people. Hoosier hospitality is not a slogan; it is our way of life. Now that this is behind us, let's move forward together with a renewed commitment to the civility and respect that make this state great.”