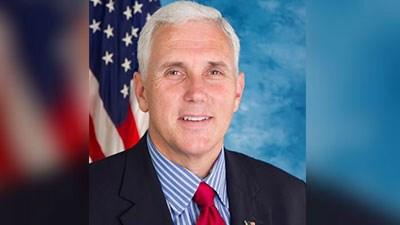 WASHINGTON (CNN) -- Indiana Gov. Mike Pence's decision to sign into law a measure that could allow businesses to turn away gay and lesbian customers in the name of "religious freedom" has left the NCAA fretting ahead of next week's men's basketball Final Four in Indianapolis.

"We are especially concerned about how this legislation could affect our student-athletes and employees," NCAA President Mark Emmert said in a statement Thursday afternoon.

He said the NCAA will "work diligently" to ensure competitors and visitors at next week's Final Four are not "negatively impacted by this bill." Emmert also said the organization, which is based in Indianapolis, will "closely examine the implications of this bill and how it might affect future events as well as our workforce."

Indiana is the first state this year to enact a measure that's being pushed in a dozen others, and Emmert's comments were just the latest in a series of stinging criticisms issued after Pence signed the bill in a private ceremony with Republican state legislators and socially conservative lobbyists Thursday morning.

Already, the gamer convention Gen Con and the Disciples of Christ church group had threatened to pull their conventions out of Indianapolis. Tech giant Salesforce said it would halt its plans to expand in the state, too.

The NCAA had hinted for days that the bill -- which has the effect of allowing businesses to challenge local laws that forbid discriminating against customers based on sexual orientation in court -- could damage the city's reputation as a host of major sporting events.

Jason Collins, who last year became the first openly gay active NBA player, asked Pence in a tweet whether it is "going to be legal for someone to discriminate against me & others when we come" to the Final Four.

Still, Pence signed the bill in his office Thursday. In a statement explaining his decision, he pointed to President Barack Obama's health care law -- which triggered a lawsuit by Hobby Lobby to ensure the company wasn't required to cover birth control through its employees' health insurance plans.

"The Constitution of the United States and the Indiana Constitution both provide strong recognition of the freedom of religion but today, many people of faith feel their religious liberty is under attack by government action," Pence said.

The move comes as Pence considers a bid for the 2016 Republican presidential nomination -- and just a year after Pence and socially conservative lawmakers lost their first policy battle against gay Hoosiers. In 2014 they had sought to amend Indiana's constitution to ban same-sex marriages -- but were beaten back by a highly-organized coalition of Democrats, traditionally right-leaning business organizations and fiscally focused supporters of Pence's predecessor, former GOP Gov. Mitch Daniels.

This year, though, the Republican-dominated state House and Senate both approved the "religious freedom" bill -- in part because it didn't receive the kind of public attention the gay marriage ban had drawn until it was already close to landing on Pence's desk.

Pence said in an interview with the WIBC radio station in Indianapolis on Thursday that the new law became controversial "because of the way some in the media have reported this."

Without referencing gay rights directly, he insisted that "this is not about any contemporary issue."

"This was a measure that frankly, Indiana should have enacted many years ago," Pence said. "It gives our courts guidance about evaluating government action and puts the highest standard -- it essentially says, if a government is going to compel you to act in a way that violates your religious beliefs, there has to be a compelling state interest."

Indiana doesn't currently have a law on the books protecting Hoosiers from discrimination based on sexual orientation. But a dozen counties do -- and opponents of the "religious freedom" law have said they're worried the new measure will be used to allow businesses to get around those local rules.

"The way the media has covered this in certain quarters -- I understand the concern that people feel," Pence told WIBC, pointing to the early-1990s congressional adoption of a federal Religious Freedom Restoration Act.

Pence tried to downplay the law's impact Thursday, but his allies who pushed it in the legislature -- led by Eric Miller, the head of Advance America and a powerful lobbyist on socially conservative issues in Indiana, who stood behind Pence at Thursday's bill signing ceremony -- touted the protections it affords businesses against gays, lesbians and transgender Hoosiers.

On his website, Miller highlighted examples of the law's effect: Christian bakers, florists and photographers won't have to participate in "homosexual marriage," he wrote, while Christian businesses won't be punished for "refusing to allow a man to use the women's restroom."

If Pence decides to mount a dark horse presidential bid -- which looks increasingly unlikely as candidates like Wisconsin Gov. Scott Walker court the same supporters he would need -- the "religious freedom" bill could give him a boost among GOP primary voters, especially in socially conservative states like Iowa.

That right wing support had slipped after Pence, who built reputation during 12 years in Congress as a die-hard social conservative, broke from his party's orthodoxy earlier this year as governor and launched an expansion of Medicaid coverage -- with some conservative tweaks -- under President Barack Obama's health care law.

But signing the "religious freedom" bill could also badly damage his prospects in a general election, where polls have shown that voters increasingly oppose policies that discriminate against gays and lesbians.

Proponents have argued the bill doesn't target gays and lesbians specifically -- but that it does protect businesses that don't support same-sex marriage from having to provide services for those ceremonies.

Eighteen others have similar measures on the books, and social conservatives have been re-energized in their push for "religious freedom" laws after the Supreme Court's decision in a health care-related case that allowed Hobby Lobby and other businesses to opt not to provide insurance coverage for contraception.

Also fueling the push: The Supreme Court's expected ruling in June on whether same-sex marriage is constitutionally protected and therefore legal in all 50 states.

But Pence and Republican lawmakers ran into intense criticism -- too late to stop the legislation from advancing, but in time for Pence to feel pressure to veto the bill rather than signing it into law.

They'd hoped it would become Pence's "Jan Brewer moment" -- a reference to the Arizona Republican governor who vetoed a similar bill last year, saying "it could divide Arizona in ways that we could not even imagine and no one would ever want."

The organizers of Gen Con, which draws thousands of gamers to Downtown Indianapolis restaurants and hotels each year, said they are considering moving their event elsewhere.

"Legislation that could allow for refusal of service or discrimination against our attendees will have a direct negative impact on the state's economy, and will factor into our decision-making on hosting the convention in the state of Indiana in future years," Adrian Swartout, the owner of Gen Con LLC, told Pence in a letter before he signed the law.

The Christian Church (Disciples of Christ), which also holds a convention in Indianapolis, told Pence it could cancel its 2017 convention there, as well.

The chief executive of tech giant Salesforce told Pence that his company -- which had bought Indianapolis-based Exact Target for $2.5 billion in 2013 -- would abandon the state and its expansion plans there if he signed the measure into law.

Salesforce CEO Marc Benioff tweeted on Thursday, after Pence signed the bill: "Today we are canceling all programs that require our customers/employees to travel to Indiana to face discrimination."

And the Republican mayor of Indianapolis, Greg Ballard, broke with Pence on the bill, saying it would put his city's economy at risk.

"Indianapolis strives to be a welcoming place that attracts businesses, conventions, visitors and residents," Ballard said Wednesday in a statement. "We are a diverse city, and I want everyone who visits and lives in Indy to feel comfortable here."