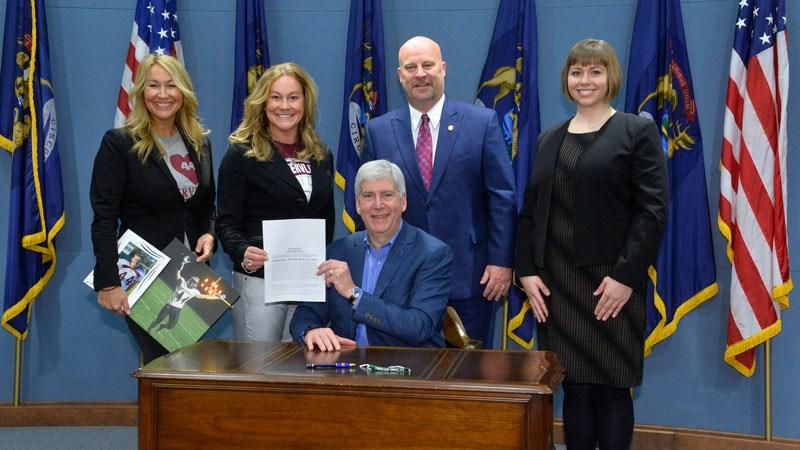 On Wednesday, Michigan Governor Rick Snyder signed the Good Samaritan law, which was inspired by the overdose death of Mason Mizwicki of Watervliet.

The law exempts anyone under 21 from prescription drug related charges if they are reporting an emergency connected to the abuse of a drug.

PA 220 was introduced as House Bill 4843 by Representative Al Pscholka, R-Stevensville. He said the activism of Mason's mother Lori Mizwicki and Aunt Brandi Huyser prompted him to sponsor the legislation.

"From the very beginning, we've said this is not just an effort to pass a bill, but to spread awareness about prescription drug abuse itself," said Representative Pscholka said in a press release. "The message isn't to go soft on drugs, but to tell kids that their future means more to us than their mistakes."

At the ceremonial bill signing, Mason's mom said the introduction of the bill has helped to broaden awareness of the dangers of prescription drug abuse.

"I believe through Mason’s voice, both parents and teens are more aware of the epidemic that is spreading into our neighborhoods and schools,” Mizwicki said. "This has to be an ongoing conversation with today’s teens, who are dealing with different issues than we had. Awareness was our goal all along. Our kids now need to ‘Know the law, Make the call, Save a Life,’ and I believe, increasingly, they will.  Mason was a friend to all, he was a Good Samaritan and he would have wanted us to fight for this. I know he's proud of us."