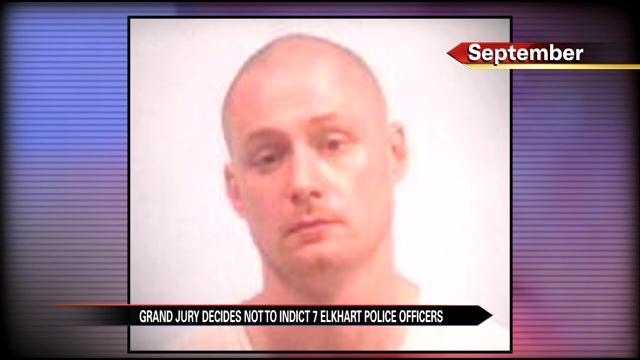 The Elkhart County Prosecutor's office revealed Wednesday that a grand jury reviewing the fatal shooting of Joseph Lee by seven police officers in September 2014 did not hand up any indictments.

The prosecutor's office revealed some new information in the press release.

According to investigators, Joseph Lee was wanted on active warrants for allegedly shooting a teenager in Mishawaka and for domestic abuse charges in Elkhart County. He was considered armed and dangerous.

Elkhart Police learned Lee may be staying at a family member's apartment in the Washington Gardens apartment complex.

Officers cleared the residence of other occupants, including children, while Lee allegedly fired shots.

The officers left the apartment because of the danger.

Lee was seen through an upstairs window pointing a gun and officers fired at him.

He then allegedly left the apartment and ran through the common areas of the complex.

An officer fired at Lee and he fell to the ground.

Instead, officers say Lee raised his arm and fired at officers again.

The source of the fatal shots could not be determined due to damage to the bullets.

Toxicology reports indicated Lee had methamphetamine and marijuana in his system.

In addition, he had a .22 caliber handgun in his hand that was damaged by gunfire.