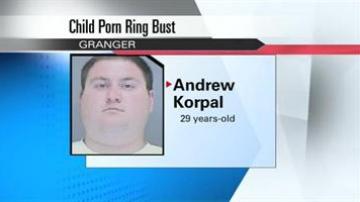 WASHINGTON -- Andrew Korpal, 29, of Granger, man was arrested as part of a nationwide online child exploitation investigation by multiple federal agencies. There were victims in 39 states and five countries.

Korpal pleaded guilty March 6, 2014 to one count of receipt of child pornography in federal court. He will be sentenced June 12.

As part of his plea agreement, he must cooperate with any law enforcement agency's investigation.

He allegedly received child pornography from a website run by Jonathan Johnson of Abita Springs, Louisiana.

Korpal was charged as part of Operation Round Table, an investigation involving Immigration and Customs Enforcement, the Department of Homeland Security, the U.S. Postal Inspection Service, and the U.S. Attorney for the Eastern District of Louisiana.

According to a press release, Korpal is one of 14 men in federal custody for related to a child pornography website on the Darknet's Onion Router, also known as Tor.

Federal investigators say there were 251 minor victims in 39 states and five foreign countries.

There were 228 victims in the US, 23 in Canada, the UK, New Zealand, Australia and Belgium.

The website's primary administrator was identified as Jonathan Johnson, 27, of Abita Springs, Louisiana. He has been charged with operating a child exploitation enterprise.

Johnson admitted to creating multiple fake female personas on social networking sites to target and exploit children and to coach other predators in his inner circle to do the same, the press release said.

The website was active from June 2012 to June 2013. There were more than 2,000 videos and had more than 27,000 members. The videos were sexually explicit and the victims were mainly juvenile boys.

Jonathan was the first person arrested and forensic analysis led investigators to ten individuals who were the primary operators, contributors or producers of material for the website. Jonathan and the ten individuals listed make up the eleven people charged in Louisiana.

Three other individuals were indicted in other parts of the country.

The investigation into the members of the website is ongoing. Federal investigators are still analyzing more than 40 terabytes of information seized during the investigation.