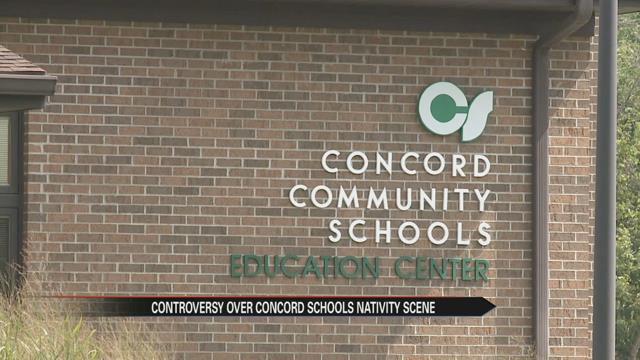 For over 40 years, students in a Michiana school district have been putting on a holiday concert including a religious scene but that could soon come to an end.

At Tuesday’s Concord Community School Board meeting there will be a chance for the public to address the board regarding the nativity scene.

This is a topic that is attracting a lot of attention and with a community that includes many bilingual parents.

One woman is making sure everyone has a chance to speak their mind.

“This is a concert that has being going on for more than 40 years no one has ever been offended and all of a sudden we are living in a time where everything is offensive,” says Daniel Montiel a Concord community member and parent.

On August 25th a letter was sent to Concord Community Schools from the Free From Religion Foundation based in Madison, Wisconsin.

The group said it was acting on the part of a concerned community member. They are requesting that the 2015 holiday concert not include a live nativity scene because there should be a separation between church and state.

“Once we know what the school district plans to do we will follow up with them if we think that they are trying to shirk their constitutional responsibilities,” says Sam Grovenor, a staff attorney for the Freedom From Religion Foundation.

Grovenor says the concert is months away so he is not expecting a response from the school district before they hear from the community.

“This is a program that encourages history, culture. It talks about relevant values like love, respect, peace, joy. I mean those are the messages you want to get out and you want to share with other people,” says Diana Montiel, a Concord community member and parent.

Montiel shares the same views as the other 6,000 people who liked a Facebook page in support of the nativity scene.

The school board will hold a meeting Tuesday night where the public can speak voicing both sides of this debate.

Montiel is bilingual and recognizes that with a school district made up of nearly 31% Hispanic students, some parents may need some help sharing their opinion in a public forum.

“So the point tonight is that I am going to be available for interpretation I’m going to be there for parents who need clarification or they want to voice their opinion,” says Montiel.